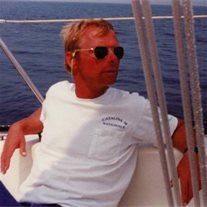 Paul Edward Canfield, 64, passed away on December 18, 2013, at Hospice of the Western Reserve. Born on March 31, 1949 in East Cleveland, Ohio to Ralph and Dorothy (Downer) Canfield, he spent his youth in Chesterland and attended West Geauga High School, graduating in 1967. Paul served four years active duty in the United States Navy from 1967 to 1971 as a Photographer's Mate (Petty Officer). His last assignment was aboard the USS Forrestal, with duty tours throughout the Mediterranean Sea. Paul earned degrees in Business Administration from Cuyahoga Community College and Kent State University. At KSU, he became a member of Sigma Chi Fraternity (Zeta Lambda Chapter). Paul's career in industrial machinery sales included positions with US Amata in California and Machinery Associates in Cleveland. Since the 1990s, he ran his own international small business (Machine Tools and Automation), selling precision machine tooling to customers in the US and Canada. An accomplished and highly skilled sailor, Paul won numerous first place trophies as a long-time member of Grand River Sailing Club (GRSC), competing with his Seidelmann sloop, Tachyon. He served as GRSC Commodore in 1994. Fellow sailors, family and friends remember Paul as intelligent, curious and multi-talented. He was never too busy for a friendly dockside chat or to lend his meticulous hand to any project, often devoting long hours to make sure things worked right. He was preceded in death by his father, Ralph, and mother, Dorothy. Surviving family members are his sister, Carol Canfield Smith, brother, Robert C. Canfield (Debi Matson), and his niece, Tonya C. Zimmer. A memorial service/celebration of life will be held on Wednesday, January 15, 2013 at Potti Funeral Home, 1009 Mentor Avenue, Painesville from 4 to 6 p.m. In lieu of flowers, donations may be made in memory of Paul Canfield to the American Cancer Society or Hospice of the Western Reserve. http://www.cancer.org/ or http://www.hospicewr.org/

Paul Edward Canfield, 64, passed away on December 18, 2013, at Hospice of the Western Reserve. Born on March 31, 1949 in East Cleveland, Ohio to Ralph and Dorothy (Downer) Canfield, he spent his youth in Chesterland and attended West Geauga... View Obituary & Service Information

The family of Paul Edward Canfield created this Life Tributes page to make it easy to share your memories.

Send flowers to the Canfield family.