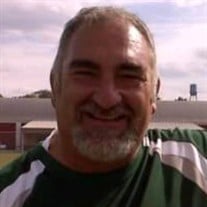 With his favorite classic rock songs playing softly, and the spring breeze off of Lake Erie slipping through the window with the sounds of the birds, Michael Wayne Yeager, age 58, peacefully took his last breath in the morning hours of the 3rd of May, 2022. He departed his earthly life for his eternal home with his devoted family and many special friends holding vigil, after a valiant five month battle with many complications from Renal Cell Carcinoma and Deep Vein Thrombosis. Michael was born on November 5,1963 to Anna Marie & Albert Yeager in Madison, Ohio. He joined his older siblings, Debbie & Ricky Joe to be raised along side many aunts, uncles and cousins all residing within the neighborhood surrounding their Perth Rd. home. It was in these streets and backyards he forged some of his dearest friendships that would remain today. He met his high school sweetheart, Laura, on the shores of Lake Erie, at Green Rd. beach at the age of 14. They married on August 27, 1988 at Immaculate Conception Church and she would remain the love of his life until his last day. He often affectionately called her Sobe, her maiden name, and she often called him Yeager. They loved taking long weekend drives together with no particular destination, always holding her hand in the car, up to and including their last drive home from the hospital. Their marriage was blessed with two daughters, one son and enriched by six beautiful grandchildren. His love of team athletics began as a member of the Madison Midget League football team, The Cowboys. Mike often gave credit to Coach Sutyak for inspiring his love of football early on. He went on to play and excel at football and basketball through to the varsity level while a student at Madison Schools. His love of community sports continued as he later coached his son, Nick, and countless other young athletes on Madison Youth Football, Madison Little League & Major League Baseball, and Madison Youth Basketball & travel team for 10 years. He shared coaching duties throughout the decade with his dear & very special friend, Greg Morrison. He was always active and at the forefront of raising funds for these important community programs and volunteered countless hours, all for the love of the game. Mike excelled and earned respect in the masonry trades as a bricklayer foreman from 1986 until 2013 when an industrial accident changed his course in the construction field he loved. He returned to college at the age of 52, earning his degree in the spring of 2017 in Construction Management. At the time of his death, he was employed at Engelke Construction Solutions as a Traveling Construction Superintendent. He worked on many iconic Cleveland buildings during his career as a mason, as well as volunteering to help with building some of the Lake County YMCA homes and Habitat for Humanity homes. His work ethic was unmatchable, he was always the first man on the job site and the last to leave. He was the definition of a devoted family man, and treasured taking trips back to his family's West Virginia homestead to sit on the back porch for hours to take in the view of the hills and listen to stories told by his uncles. Many of his Italian family's recipes originated there and have continued to be enjoyed by his children and grandchildren. He was known as Poppi to his grandkids who could often be found wrestling with him, snuggling on his chair with him watching movies, or having breakfast with him at the local family diner. The simplest pleasures in life brought the greatest joy to Michael. Mike leaves behind a wide circle of cherished friends who have shared many adventures over their 50 plus years of friendship. Whether they were on one of their many vacations, chilling lakeside or at a winery having a few drinks, playing poker or strumming guitars while gathered in Worthy's music room, they were all just happy to be together, reminiscing over old shenanigans or making new memories. To those old friends, Yeager cherished your friendship every day of his life. Be reminded when you think of him that Life, well lived, is long enough. Michael is survived by his loving wife, Laura, his adoring daughters, Erika Costello and Kayleigh Samassekou, all of Madison. His loving memory will be cherished by his grandchildren, Dominic, Sofia, Colin, Aria, Alcie & Kade, they were his joy. He also leaves his devoted sister, Debbie and Brother- In- Law, Joe White of Madison and his loving brother Rick,(Pam) of Unionville, His Mother-In-law, Sharon Sobe of Madison, and Father-In-Law, Larry & Malinda Sobe of Mt. Airy, NC., and special Brother-In-Laws, Michael Sobe of Madison and Steven (Erin) Sobe of Rural Hall, NC. as well as many special cousins whom he carried happy memories with all of his life. He was reunited upon his death with his beloved son, Nicholas J Yeager, his parents, Anna Marie & Albert Yeager, and his sister, Tammy Yeager. A funeral service will be held at 11am on Tuesday, May 10, 2022 at the Potti & Marc F. Burr Funeral Home 2726 Hubbard Road, Madison, OH. A visitation will be held from 2-4 & 6-8pm on Monday at the funeral home. Obituary, online condolences and memorial gifts available at www.marcfburrfuneralhome.com.

With his favorite classic rock songs playing softly, and the spring breeze off of Lake Erie slipping through the window with the sounds of the birds, Michael Wayne Yeager, age 58, peacefully took his last breath in the morning hours of the 3rd... View Obituary & Service Information

The family of Michael Wayne Yeager created this Life Tributes page to make it easy to share your memories.

With his favorite classic rock songs playing softly, and the...

Send flowers to the Yeager family.