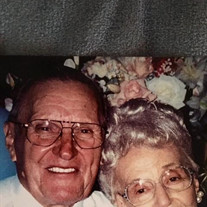 Irene Grech (nee Molnar) age 97, of Leroy was born May 17, 1921, to Andrew and Veronica Bezzeg Molnar on their Painesville Dairy Farm. She passed away peacefully on July 16, 2018 at Cardinal Woods in Madison, Ohio. The youngest of 7 Children, Irene attended St. Mary’s School and helped her mother with the housework and cooking. She also helped her oldest brother with the business end of the dairy, learning to drive before licenses were required. She later worked at the Rayon Plant. It was while she was employed as an usherette at the Lake Theater that she met her future husband, Frank Grech. They married on June 19, 1945. They moved 7 times, ultimately returning to the Grech homestead in Leroy, Ohio. Irene was always a lady in every way, taking great pride in keeping her home and herself just so. She took great pleasure in entertaining, cooking, baking, gardening and arranging flowers. She was also a lifelong Catholic, praying the Rosary daily for many years. Her strong faith helped her through many difficult times. She was preceded in death by her parents, her siblings and their spouses, and the love of her life Frank. She is survived by her children Bette Ann (David) Meeson, and Frank (Christy) Grech; Her Grandchildren David (Heather), Douglas (Amanda) and Jeff (Mandy) Meeson, Michelle (Andy) Ballenger, and Tricia (Nigel) Robertson. She also leaves behind 8 soon to be 9 Great Grandchildren, many nieces and nephews, as well as countless friends.  A Funeral Mass will be July 21, 2018 at 11 am. Visitation will be held 1 hour prior to the Funeral Mass at Immaculate Conception Church 2846 Hubbard Road Madison, Ohio. Burial will be in Riverside Cemetery. In lieu of Flowers, if you wish contributions may be made to Hospice of the Western Reserve or to Immaculate Conception Church in Madison. The Potti Funeral Home of Madison are handling the arrangements.

Irene Grech (nee Molnar) age 97, of Leroy was born May 17, 1921, to Andrew and Veronica Bezzeg Molnar on their Painesville Dairy Farm. She passed away peacefully on July 16, 2018 at Cardinal Woods in Madison, Ohio. The youngest of 7 Children,... View Obituary & Service Information

The family of Irene Grech created this Life Tributes page to make it easy to share your memories.

Send flowers to the Grech family.