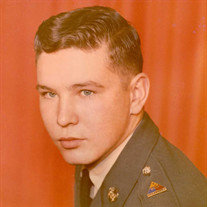 Emmett H. Hines “Sonny”, age 78, of Hephzibah, Georgia, after fighting a brief illness, joined his beloved wife on Wednesday, January 2, 2019. Born in Webster Springs, West Virginia on October 14, 1940 he was a son of the late Emmett O. Hines and Flossie Marie Riffle Hines. He was married to his loving wife of 53 years, Emogene Bickel Hines until her death in 2016. A longtime resident of Madison, Ohio, he graduated from Perry High School in Perry, Ohio. After high school, he joined the United States Army and spent several years in Germany. After the Army, he met his wife Emogene, and they married in 1963. Throughout the years, he worked in several factories, then at Chuck’s Mobile for 20 years. Sonny then worked at Secor Nursery for an additional 20 years. Finally, he and Emogene decided to retire and move to Georgia. He was a lifetime member of the Lake County Rod and Gun Club in Ohio, and a member of the American Legion Post #120 in Waynesboro, GA. In addition to his wife and parents, he was preceded in death by two sons in law, Ken Swisher, and Jimmy Kirk; a great grandson, Gabriel Wray; and all five of his siblings. Sonny is survived by three children, Ceresa Kirk of Hephzibah, GA, Ernie Hines of Painesville, OH, and Regina Swisher of Keysville, GA, nine grandchildren; fourteen great grandchildren; one great great grandson; and many nieces and nephews. Visitation will be held from 3:00 - 5:00 pm on Saturday, January 5, 2019 at DeLoach - McKerley-Prescott Funeral Home & Cremation Service in Waynesboro, Georgia Additional visitation will be held from 4:00 - 7:00pm on Monday, January 7, 2019 at Potti & Marc F. Burr Funeral Homes of Madison 2726 Hubbard Road, Madison, OH 44057. Funeral Services will be held at 11:00 am on Tuesday, January 8, 2019 at the funeral home. Pastor Paul Bomeli will officiate. His final resting place will be at Perry Cemetery in Perry, Ohio.

The family of Emmett Holiday Hines "Sonny" created this Life Tributes page to make it easy to share your memories.

Send flowers to the Hines family.