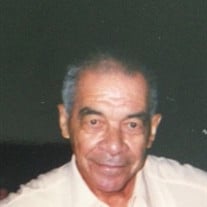 Eduardo Bonilla Aponte Sr was born in Coamo, Puerto Rico on December 9, 1930. He moved to the mainland US, initially NYC, at age 18 to live his dream. He began working for the Railroad there before transferring to Northeast Ohio and the Norfolk & Southern Railroad where he worked as what was then known as a "Gandy Dancer" or rail man, straightening rails and repairing crossings to make them safer. It was his physical strength, strength of character, his dependability, and his pride in making our rail system safe that led to the respect and trust of management, as well as his focus as a role model for railroad workplace safety. Throughout his 39 years with the Norfolk & Southern Railroad Corporation up to his retirement on November 25, 1992, he received merit awards, often was called on for the special assignments, and was frequently acknowledged as one man doing the work of two. His recognition at retirement highlighted his consistent loyal and devoted service. Eduardo enjoyed gardening, landscaping, music and dancing while bringing a smile to everyone's face with the kindness in his eyes. He continued these avocations with enthusiasm during his retirement years. He married Nancy Judy in 1965 and lived in Geneva where they had a daughter, Lisa Faye Aponte on August 18, 1967. He is preceded in death by Nancy, his wife, and Eduardo Jr., a son from a previous marriage. He is survived by his daughter, Lisa ( Schneider) of Mentor, grandchildren, Brittany Alexis, Korey Scott of Mentor, Eddie, Mishelle, Nyvette of California, and several brothers, sisters, nephews, nieces, cousins and great grandchildren. Arrangements are being handled by Potti Funeral Services. Cremation is planned, followed by a celebration of his life on Saturday, June 25, 2016 from 2PM to 5PM at Mentor Harbor Yachting Club in Mentor. In his memory and honor, the family requests that you share the gifts love, wealth, and health with family and friends.

Eduardo Bonilla Aponte Sr was born in Coamo, Puerto Rico on December 9, 1930. He moved to the mainland US, initially NYC, at age 18 to live his dream. He began working for the Railroad there before transferring to Northeast Ohio and the Norfolk... View Obituary & Service Information

The family of Eduardo Bonilla Aponte created this Life Tributes page to make it easy to share your memories.

Send flowers to the Aponte family.