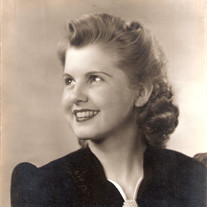 .Doris. L. (Killinen) McKinven, 94, passed away on July 1, 2014, at Kemper House in Mentor, Ohio. A memorial service will be held on July 8 at 11:00 am at Zion Lutheran Church, 508 Eagle St., Fairport Harbor, OH 44077. The inurnment service at Painesville Evergreen Cemetery will be for the family. Doris was born November 4, 1919, in Fairport Harbor, the tenth and youngest child of Erica and Matt Killinen. Throughout her life she loved books, the beauty of the natural world, and Fairport, her hometown. She was a devoted mother of three and caregiver to many of her older brothers and sisters, including Ina, Pearl, and John Killinen. She was proud of her Finnish heritage and sought to preserve her family's history. Doris was class valedictorian at Harding High School in Fairport, graduating in 1936. She attended Ohio University from 1937 to 1941, where she graduated magna cum laude, with B.S.in education. At OU she was president of the women's honorary society and president of Lindley Hall, the largest women's dormitory on the campus. OU is also where she met her future husband, John McKinven. After working in Cleveland during World War II, Doris married John in 1944 in San Antonio, Texas, where he was a lieutenant in the Air Corps. After the war, they moved back to the Painesville area, where she taught at Perry High School. The McKinven family moved several times in the 1950s, from Painesville, OH to Cleveland, then to Pittsburgh. In 1959 they moved to Greenwich, CT and then to Lake Forest, IL, where they lived from 1966 to 2001. In 1970 Doris earned her M.A. in English literature from Northwestern University. She taught at Bannockburn School, 1968-1969, and worked in the Donnelley Library at Lake Forest College, 1981-1988. She was a member of the Lake Forest League of Women Voters and a Great Books reading group.

The family of Doris L. (killinen) Mckinven created this Life Tributes page to make it easy to share your memories.