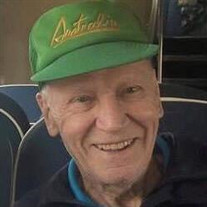 Dennis E. Sullivan, age 92, of Chardon passed away April 17, 2020, at Maplewood of Chardon. Born January 4, 1928, in London, England, to Earnest and Mary (nee: Weston) Sullivan, he was a longtime Perry resident before moving to Maplewood in 2019. Dennis served in the English Army before meeting the love of his life, Mary “Maureen” Flood, whom he married in London in 1957. After immigrating to the United States in 1959, he held various management positions with Jergens, Inc. He and Maureen were also proud to become U.S. Citizens. Along with his wife, Dennis was a member of St. Cyprian Catholic Church in Perry and attended Immaculate Conception Church in Madison. He is survived by his wife; daughters Teresa (Jim) Hogan of Sagamore Hills, Catherine (David) Golladay of Rocky River, and Linda Sullivan of Painesville Township; grandchildren Michael, Bridget, Megan, Monica, Colleen, Shannon, Erin, and Brenna; and great-grandchildren Oliver, Margo, Levi, Finnley, and Liam. He was preceded in death by his parents and his brother, William Sullivan. Dennis’s work afforded him the opportunity to travel worldwide, often accompanied by Maureen. He had many passions, including golf, horseback riding, gardening and bridge. In his 70s he took up painting and was a prolific artist over the last 20 years of his life. A memorial mass will be at 10am on Dec. 11, 2021 at St. Cyprian Parish in Perry with burial to follow at Perry Cemetery. Visitation will be from 9am until the time of the service at the church. Arrangements are entrusted to the Potti & Marc F. Burr Funeral Homes. Donations suggested to Hospice of the Western Reserve. Obituary, online condolences and memorial gifts available at www.marcfburrfuneralhome.com.

Dennis E. Sullivan, age 92, of Chardon passed away April 17, 2020, at Maplewood of Chardon. Born January 4, 1928, in London, England, to Earnest and Mary (nee: Weston) Sullivan, he was a longtime Perry resident before moving to Maplewood in... View Obituary & Service Information

The family of Dennis E Sullivan created this Life Tributes page to make it easy to share your memories.

Send flowers to the Sullivan family.