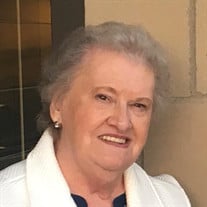 Catherine Ann Gurnick, 81, of Chardon, peacefully died on October 13, 2020 after a brief illness. Having married Donald P. Gurnick (d. 2009) at St. Joan of Arc, Chagrin Falls, in 1964, Cathie cherished her vocation as his wife and as mother to their five children: Joanie (John) Klemens, Matthew (Lisa), Rev. Michael, Donna (Rich) Fillman, and Anita (Joe) Matic. She was grateful for the gift of her grandchildren and her extended family: Courtney, Brian, Jake, Nik, Josie, Kevin, Delaney, and CJ. Daughter of the late Louis “Gus” and Catherine Tiderman (nee Carr), she is survived by one sister, Ellen Newcomb, and preceded in death by another sister, Mary Lou Walter, and brother, Robert. She was also very proud to be an aunt, great aunt, and great-great aunt. She is survived by her uncle, John Tiderman. Cathie was honored to bring the Holy Eucharist to the Homebound and was grateful to be included in many parish and community gatherings. Although she had retired from teaching in the Parish School of Religion program, Cathie always enjoyed hearing updates about former students. And how she loved her friends, from the “breakfast club” to her close neighbors, who were all very caring toward her. Out of concern for the safety of everyone during Covid-19, the Mass of Christian Burial and internment will be held in private with plans for a Celebration of Cathie’s Life when it is safe for family and friends to gather. In the meanwhile, we thank everyone for their prayers and kind words. In lieu of flowers, contributions to the Saint Vincent de Paul Society at Saint Mary Parish, 401 North Street, Chardon, or to the Annual Appeal for Priestly Formation, Diocese of Cleveland, 1404 E. 9th Street, Cleveland, would be most appreciated. Arrangements are entrusted to the Potti & Marc F. Burr Funeral Homes of Chardon, Painesville, Madison & Fairport Harbor. Obituary, online condolences and memorial gifts available at www.marcfburrfuneralhome.com.

Catherine Ann Gurnick, 81, of Chardon, peacefully died on October 13, 2020 after a brief illness. Having married Donald P. Gurnick (d. 2009) at St. Joan of Arc, Chagrin Falls, in 1964, Cathie cherished her vocation as his wife and as mother... View Obituary & Service Information

The family of Catherine Ann Gurnick created this Life Tributes page to make it easy to share your memories.

Send flowers to the Gurnick family.