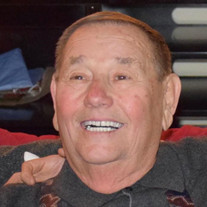 Alfred Denman, age 79,  of Venice,  Florida passed away Wednesday, November 15,  2017 at Venice Regional Bayfront Health Hospital.   He was born to the late Andrew and Anna Denman on December 6, 1937 in Nizny Hrabovec, Slovakia.  Survivors include his wife of 57 years Betty Jean (Marshall) Denman,  his children Mark (Patrice), Timothy , Susan Lerner (Michael) and David (Sally). His beloved grandchildren Alex, Jake and Nick Denman; Clay, Sarah, Mitch and Samantha Denman; Sam, Matthew, Emma and Ben Lerner; and Andrew Denman; niece Maria Mason and her children Max and Natalya Mason.  Preceding him in death was his brother, Joseph and his sister, Mary of Slovakia.  Funeral mass will be held Saturday November 25, 2017 at 10:00am at St Gabriel's church located at 9925 Johnnycake Ridge Road, Concord Twp., Ohio.  There will be a reception immediately following the service at the Painesville Elks at 723 Liberty Street in Painesville, Ohio.  Al's friend said "When I think of Al, I will always smile."  Nothing made him happier then spending time with his family and friends, gin at the Elks, dinner at his children’s houses, traveling with his wife or watching TV with his favorite dog, Ruby.  Al was a longtime member of the YMCA, Knights of Columbus, the Lake County and Ohio Bar Association and the Painesville Elks.  He was a graduate of Fairport Harbor, Kent State University and Cleveland Marshall College of Law.  Al became a lawyer in 1971 and always had a passion for practicing law. He worked as an attorney in private practice from 1971 until his retirement in 2006. In lieu of flowers, contributions can be made to the Lake County YMCA or to a charity of your choice.

The family of Alfred Denman created this Life Tributes page to make it easy to share your memories.

Send flowers to the Denman family.