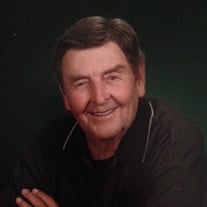 Alan O'Janpa, 82, of Fairport Harbor passed away on Jan. 27, 2015 at Lake West Hospital in Willoughby. He was known throughout his childhood and high school days as "Spin," but his U.S. Navy friends called him "O'J" and that's how he was known the rest of his life. He was born in Morgantown, WV on Oct. 10, 1932 to John Everett O'Janpa and Geneva Applegate, who passed away shortly after giving birth. He was then taken to his grandparents' home in Fairport Harbor and raised by the O'Janpa family. He was an outstanding athlete in high school, participating in all sports, with exceptional skill in football. As quarterback, he led Fairport to several winning seasons and was chosen to the Jaycee's All Ohio Football Team and honored in Columbus in 1950. He was offered scholarships from many colleges, but he chose Ohio State University after being recruited by Woody Hayes. After one season he decided to join the U.S. Navy. He was chosen as Honorman of his squadron at Great Lakes. Specializing in electronics, he traveled to Japan and Hawaii working with the crews on the flight ships. After his discharge, he attended Bowling Green State University where he majored in Physical Education and History and was on the track team, excelling in discus. After graduation he became a teacher at Mayfield High School, was assistant football coach and head track coach for 25 years. His track team won 3 Greater Cleveland Championships and 2 Freeway Conference Championships. While at Mayfield, he attended Kent State University where he received his Master's degree in Education. Alan has always loved all sports, boating, fishing and water skiing. One of his later accomplishments was being elected to the Fairport Harding High Hall of Fame in 2007. He was passionate about history, politics and was an avid reader. He was a member of Zion Lutheran Church. He is survived by his wife of 60 years, Janet O'Janpa, daughter Kristine (Larry) Ruggiero, granddaughters Carly and Natalie Ruggiero, brother-in-law David (Cecilia) Olle of Vermont, Nieces Andrea and Priscilla Olle, sister-in-law Judy (Dale) Leathers, his beloved border collie Ollie, and many friends and former coaches he worked with. Family will receive friends at Potti Funeral Home 538 Fifth St in Fairport Harbor on Friday Jan. 30th from 6-8pm and also on Saturday morning in the Zion Lutheran Church from 10-11am. Funeral services will be at 11am on Saturday Jan. 31st at Zion Lutheran Church 508 Eagle Street Fairport Harbor, O. Interment will be at Zion Lutheran cemetery in Fairport. In lieu of flowers, donations in Alan's name may be made to the Wounded Warrior Project, 301 Grant St., Pittsburgh, PA 15219 or Zion Lutheran Church of Fairport Harbor.

Alan O'Janpa, 82, of Fairport Harbor passed away on Jan. 27, 2015 at Lake West Hospital in Willoughby. He was known throughout his childhood and high school days as "Spin," but his U.S. Navy friends called him "O'J" and that's how he was known... View Obituary & Service Information

The family of Alan E. O'janpa created this Life Tributes page to make it easy to share your memories.

Send flowers to the O'janpa family.